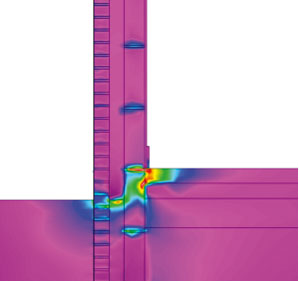 Why Should I Pay Attention To Thermal Bridging?

As buildings become more energy efficient with better insulation it is important to address the thermal bridge at the wall floor junction which can contribute up to 30% of a building’s total heat loss.

Thermoblock is a load bearing insulation element and therefore is more expensive that say an aircrete block however, by using Thermoblock, other insulation materials can be removed or reduced to offset the costs. Click here to see.

Taking the lead from the EU’s Energy Performance and Buildings Directive, all building regulations in the UK and Ireland now state the following:

“The building fabric should be continuous over the whole building envelope and constructed so that there are no reasonably avoidable thermal bridges in the insulation layers caused by gaps in the various elements.”

Cold bridges occur where the wall meets the floor but until recently it was impossible to place insulation under a supporting wall because the insulation would have been crushed. It was for this reason that Marmox Thermoblock was developed.

Thermoblock is a block of load-bearing insulation material with a thermal conductivity of 0.047W/mK strong enough to withstand a load of 9N/mm2. Its function is to eliminate or reduce the thermal bridge at the wall to floor junction. For further information and specifications of Marmox Thermoblock, please see our Thermoblock page.

Marmox Thermoblock is used in masonry AND timber-framed AND steel-framed walls. 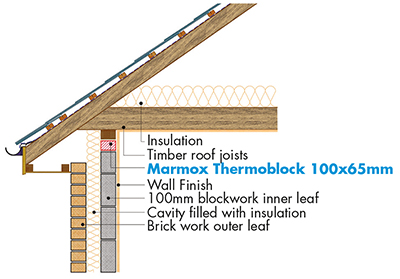 Cold bridges also occur at the eaves. Placing Marmox Thermoblock at the junction can eliminate this heat loss and considerably reduce the condensation risk.

Balconies are effectively massive thermal fins on the sides of buildings often responsible for losing a significant amount of heat. Traditionally, balconies have been constructed by extending the concrete slab through the wall into the outside. Such a balcony design is a prime example of a thermal bridge which allows the heat within the building to easily escape along that concrete slab. This will result in condensation, mould growth along with significant heat loss and higher heating costs.

Steel balconies make use of structural thermal breaks which Marmox do not manufacture. Marmox Thermoblock can however be used in the wall both directly above and below the penetrating slab to thermally isolate the internal wall from the outside.

The heat is pulled out of the building because the internal surface area is considerably less than the external surface area in contact with the much colder temperature. This problem can be reduced by making the external surface area in contact with the cold outside temperature effectively smaller and is achieved by externally insulating the slab with Marmox Multiboard or Marmox Sloping Board, see our Balconies page for more information. All thicknesses of Marmox board are external grade thermal insulation boards and can be fixed using a cement-based tile adhesive to the concrete. By reducing the amount of slab exposed, the  value will be reduced.

Offsetting the cost of including Thermoblock

Marmox Thermoblocks are not replacement blocks, they are not slightly better versions of aircrete blocks they are pieces of load-bearing insulation designed to eliminate the cold bridge. In terms of pricing therefore they should not be compared with masonry units.

Including one course of Thermoblock to the perimeter of a detached house could add between about £600 to £900 to the build cost.

Including Thermoblock in structure will reduce heating costs. Studies have shown that not addressing a cold bridge at the wall to floor junction can result in heating costs being 15% higher than they need to be, potentially up to £150 per year extra. Payback is therefore approximately between about 4 to 6 years.

Replacing a block or a brick with a Thermoblock will clearly be more expensive but other insulation materials can now be removed from perimeter to lintel insulation.

Including Thermoblock in a structure will remove the need for other insulation. Generally, perimeter insulation can be removed, inter-leaf insulation extending into the void can be removed and wall insulation thickness can be reduced. All details will be different but Marmox-UK can provide free thermal modelling to calculate the most cost effective way of achieving an insulation target upon request. Using a better Y value enables less insulation to be used elsewhere. This can often lead to overall lower costs.

This resulted in all of the cavity board being the cheaper 100mm thick version instead of the 125mm thick type.